Oregon or Bust – The Journey Begins

We have officially left Pennsylvania!! Took a little longer than expected, but after picking up a rooftop cargo carrier and spending a few hours playing real-world Tetris, we got everything in with room to spare!

This is not the final version, but you get the idea…

Stayed the night with Little Bird and his parents in Frederick, MD – it was cold last night!! It looks like we’ll be skirting a decent snowstorm and adjusting our route slightly to avoid it. Since when does Alabama get snow?!?

Anyway. Swinging through Pulaski, VA to give the mechanic the title to the Previa and then I think we’ll aim for Asheville, NC for the night – which is not scheduled to get snow tonight. If we leave early tomorrow and drop through Atlanta to Birmingham, I think we’ll be in the clear! It’s definitely the longest route possible, but better safe than sorry.

Tabitha apparently has a nervous bladder, but finally settled in.

I’ll get some better pictures today and see what fun roadside attractions we can spot! Find me on Facebook for updates as well… 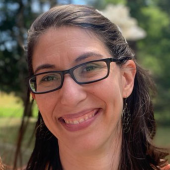 The Saga of Bertie the Previa – Part 1

Down on the Bayou

A Departure Delayed – Leaving This Weekend

The Saga of Bertie the Previa – Part 2

Support me on Patreon

This journey is just beginning, and I'd like to have a whole lot more time to produce content and useful resources for you! Coming soon - audio and video! Any support you might be able to offer would be greatly appreciated. Thank you!

My name’s Briana. I’m a single mom in her late 30s, working full-time as a tech professional and raising two amazing teenage daughters. I’ve got issues – health issues, life issues, you name it. This is my attempt to come to terms with (or at least vent about) some of them – and maybe share some hard-earned wisdom, or at least help you realize you’re not alone out there.

Hit me up at contact@virtual-tea.com if you want to talk. 🙂